The premium version of User access management allows each user to have multiple roles within the zenloop app. Each role is linked to a survey group - which means you can use survey groups to limit the scope of each user role.

Your company operates within Germany, Austria and the United Kingdom and has multiple surveys across these touchpoints:

You, therefore, put your surveys into the following 6 survey groups (in bold):

Finally, you give your users the following user roles for the respective survey groups - so they can only access what they are working on:

One survey can be a part of more than one survey group - which means a user can have more than one role for the same survey. For example in the User Roles table above - you can see that the IT Operations Manager - UK has access to the Product - UK survey twice:

The Users tab contains information about all your users within your zenloop account. For each user, you can see which survey groups he or she has access to, as well as which user roles are linked to each accessible survey group.

The Survey Groups tab contains information about all survey groups created within your zenloop account. For each survey group, you can see which users have access to it, as well as which user roles are linked to each user. You can also see which surveys are included in a survey group by clicking the respective icon next to its name: 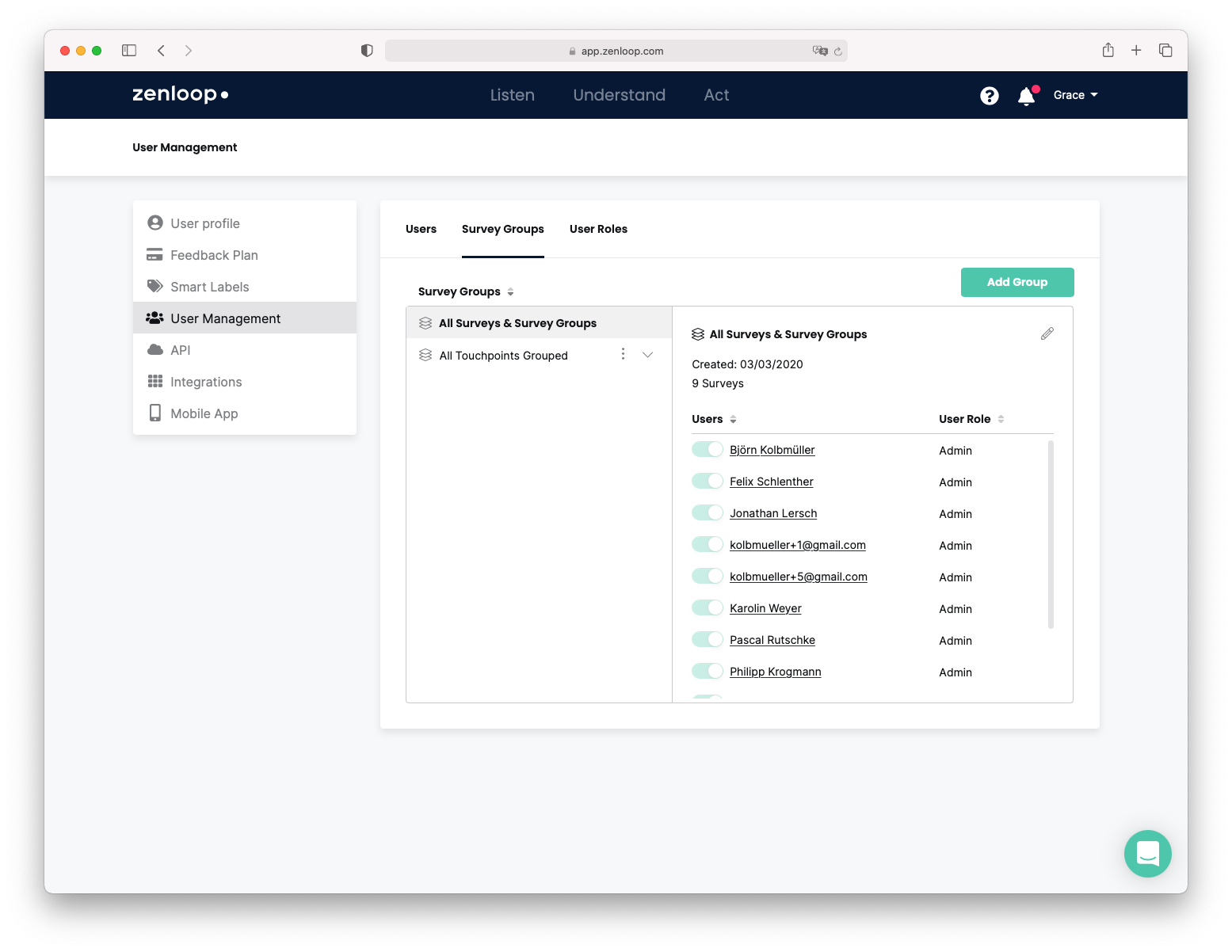 There are two types of permission scopes: organisation-level and survey group-level.

Only the Admin role allows managing users, i.e. changing their roles as well as removing them from the zenloop account. Other user roles only allow inviting new users to the app and adding existing users to new survey groups.

To add an existing user to a survey group where you have access yourself, you could do one of the following:

Then you would have to select a role you would like the user to have in the selected survey group.

When you create a new survey, you can include this survey into survey groups that you have access to. By default, the only survey group that the newly created survey becomes a part of is All Surveys & Survey Groups.

Please note: if you don't have access to All Surveys & Survey Groups and you have not selected any other survey group during survey creation then you will not be able to view the new survey after it has been created.

Q: If I am an Admin within just one survey group, does it mean I can add surveys to any other survey group as well (for example, which I don't have access to)?

A: You can edit any survey group that you have access to (no matter under which user role) and you can add any accessible survey to it. However, if you don't have any access to a survey group (and as a result, its surveys) you won't be able to add surveys from this survey group to other survey groups.

Q: I have a user role in All Surveys & Survey Groups. Which permissions do I have in all other survey groups?

Q: I am an Analyst in All Surveys & Survey Groups, but I also have an Admin role for one other survey group. Which permissions do I have in that group then?

Q: If I want to add a user to a survey group that I have access to, what roles can I assign to this user?

Q: I am the Account Owner and I want to transfer my ownership to another user. Which roles will I have after the ownership transfer is complete?

A: When you initiate the transfer you can select any role within any number of survey groups. Those roles will be assigned to you after the transfer is complete.

Q: I am editing a survey but I can't see all survey groups that this survey belongs to. Why is that?

A: Only those survey groups where you can manage surveys are displayed in the respective dropdown list. There could be other survey groups that this survey is a part of, but those won't be displayed if you don't have the necessary access rights (i.e. to save this survey). Please note that even if you have the right to edit survey groups (which is an organisation-level permission), you still can only include those surveys that are currently accessible to you.